Will Ferrell is one the biggest celebrities to #deletefacebook.  Here’s the announcement his decision — on Facebook.

Facebook is now managing a growing exodus users, and this one looks like the biggest yet.  Earlier this week, comedic actor Will Ferrell announced his intentions to delete his Facebook account for good.  But flushing away millions followers is a lot harder than it looks. 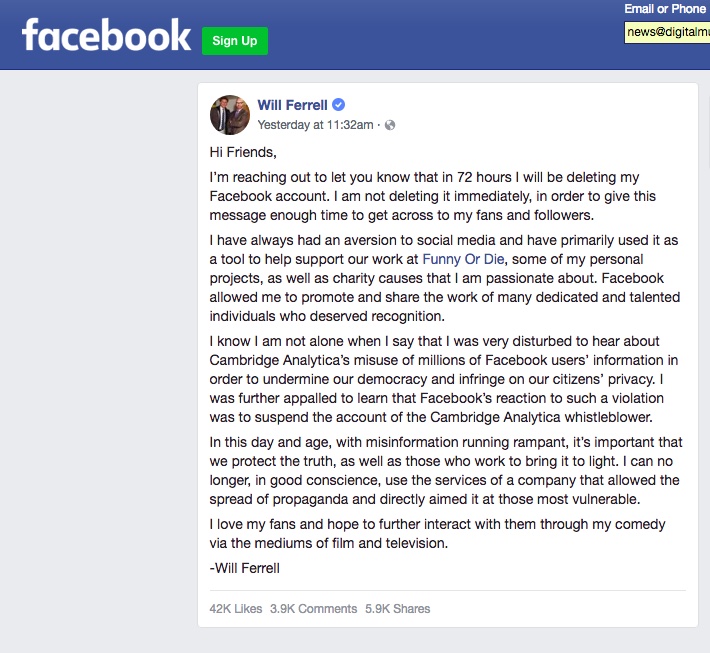 But in fairness, Ferrell is just giving fair warning to Facebook users who aren’t deleting their accounts.  That includes millions followers who probably like getting updates from the comedian.

But saying goodbye to millions followers is a tough decision, especially after years building and maintaining a prile.  That may be keeping a lot advertisers on the network — for now.  At present, only a handful advertisers have pulled their campaigns from the social network, including Sonos, Mozilla, and Pep Boys.

Major advertising agencies have also expressed deep concern about Facebook’s privacy violations, though we’re yet to see pullouts from mega-brands like BMW, Pepsi, or Nike.

But that doesn’t mean some bigger names aren’t bailing on their accounts.  Just recently, Tesla and SpaceX deleted their accounts, thanks to some prodding Elon Musk.  Playboy has also pulled out, based on privacy issues.

Separately, Mozilla has created a special browser extension to help manage f-network data capturing and cookie-tracking from the social network.

Meanwhile, Facebook is facing a torrent criticism that keeps amplifying.

I’m reaching out to let you know that in 72 hours I will be deleting my Facebook account. I am not deleting it immediately, in order to give this message enough time to get across to my fans and followers.

I have always had an aversion to social media and have primarily used it as a tool to help support our work at Funny Or Die, some my personal projects, as well as charity causes that I am passionate about. Facebook allowed me to promote and share the work many dedicated and talented individuals who deserved recognition.

I know I am not alone when I say that I was very disturbed to hear about Cambridge Analytica’s misuse millions Facebook users’ information in order to undermine our democracy and infringe on our citizens’ privacy. I was further appalled to learn that Facebook’s reaction to such a violation was to suspend the account the Cambridge Analytica whistleblower.

In this day and age, with misinformation running rampant, it’s important that we protect the truth, as well as those who work to bring it to light. I can no longer, in good conscience, use the services a company that allowed the spread propaganda and directly aimed it at those most vulnerable.

I love my fans and hope to further interact with them through my comedy the mediums film and television.