A mind-expanding new release from new Shackleton-led collective ahead of Berlin Atonal performance.

Stalwart electronic producer Shackleton has formed a new group called Tunes of Negation. Ahead of their performance at this year’s Berlin Atonal festival, they have announced a new double LP, Reach The Endless Sea.

The release is named after the eponymous poem by thirteenth-century mystic Jalalu’l-Din Rumi, which Cosmo Rhythmatic explain “is a description of what Shackleton himself hopes to achieve with the music”, to “aid transmutation and enter into the light”.

They further describe it as “a meditation on the non-finitude of life and spirit, and the limits of perception in dealing with it.” Towards this, the “double-cantos continuum” of opening track ‘The World Is A Stage’/‘Reach The Endless Sea’, “deals with time, or rather its illusory, treacherous nature, as well as spiritually investigating ideas of immortality, memory, and grief.”

This iteration of the seemingly to-be fluid group, which QU Junktions characterizes as “an open-ended musical project revolving around Shackleton and a fluid cast of musicians”, features Takumi Motokawa on keys, percussion, and gongs, Raphael Meinhart on mallets and percussion, and haunting guest vocals by Heather Leigh.

Reach The Endless Sea arrives on October 17 and is available for preorder here. Check out the cover art and tracklist below. 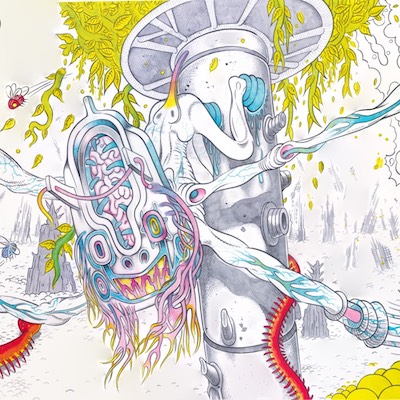