Posted on March 6, 2018 by Katherina Alvarez

He was the king music retail, until music retail came crashing down.  Russ Solomon, founder and longtime ruler the Tower Records empire, has just passed away at 92.

It started in Sacramento in 1960, and ultimately spread its tentacles as far as Japan.  And once upon a time, Tower Records ruled music retail.

Now, the guy who started it all, Russell Solomon, has passed away.  The passing happened late Sunday, March 4th, according to details confirmed by Russell’s son, Michael.

If Tower seems ancient today, it was actually ahead its time in 1960.  In sleepy Sacramento, initial business was ten sluggish, despite the ingenious approaches employed by Solomon.  Once a second store was opened in San Francisco in 1968, however, the concept started taking f.

At its peak, Tower Records had roughly 200 stores in the US alone, and spread across 15 countries.  Its mega-sprawl stores were sometimes monstrous warehouses, stretching larger than football fields.  Listening stations, endless selection, and knowledgable staff made Tower the perfect hangout spot, with like-minded aficionados enjoying the atmosphere.

+ Is the Price Vinyl Going Too High?

Actually, a local connection was what Solomon so masterfully created.

“We wanted people in the store to run the store — they’re your strength,” Solomon told the New York Times — oddly, for his own obituary.  “Central buying is just a bad idea.  You can’t make decisions on what to do in Phoenix if you’re sitting in New York or London.”

Locations in hip cities like New York, San Francisco, and Los Angeles were legendarily cool.  And so were locations in ‘b-markets’.  Across that entire map, big labels vied for key floor placement and adequate stocking.  Other music retailers abounded, including the similarly-massive Virgin Megastores, but Tower remained the industry standard. 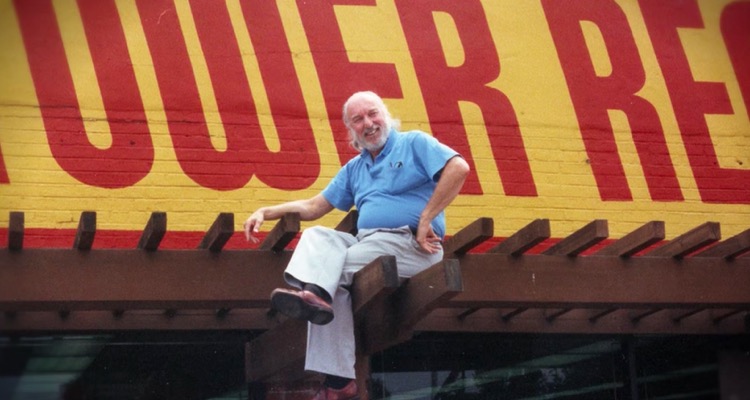 That is, until the industry itself eviscerated Tower and its ilk.  Solomon, once the ingenious retail marketer with a knack for building music community, was stumbling badly.  Napster made $16.98 CDs seem ludicrous, and piracy slowly killed the community vibe.

+ Why I Still Buy Music in the Age Spotify

Solomon, sadly, was unable to pivot.

In the face digital, it’s unclear how a store that thrived on high-priced CDs and scarcity could transform itself — without destroying itself.  By the 2000s, iconic Towers were getting bulldozed or retritted into Urban Outfitters and J Crews, with major labels scrambling to make sense MP3s, torrenting, and that thing they called ‘streaming’.

These days, younger music fans have no recollection Tower Records, though smaller record shops have survived.

Actually, there’s a great documentary on Tower Records — which course focuses on Russ Solomon as well.

It was released in 2015 by Colin Hanks after a successful crowdfunding, and fers a great look at Tower’s huge ups-and-downs.  Definitely worth checking out, if only to see the community that once existed around record buying.  Solomon played a huge role in creating that.

Here’s a teaser for “All Things Must Pass: The Rise and Fall Tower Records.”