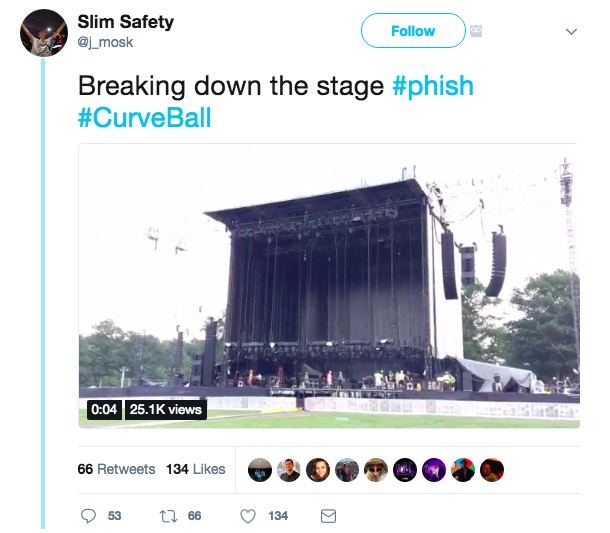 Fans looking forward to Phish’s Curveball festival in New York have been left upset after the New York State Department of Health issued a statement saying they could not grant the permits for the event to continue as scheduled.

The statement from the NYC DoH says, “With a 14 county State of Emergency still in effect, the prospect of additional inclement weather, and a mandatory boil water order for the Village of Watkins Glen issued today, [we] are unable to issue the required permits for this weekend’s Curveball Festival.”

And that was the end of that one.

The sold-out Curveball Festival has been running for 11 years, and some fans were already camped outside the venue when the announcement came.  Those fans were allowed to stay overnight but had to vacate the premises by noon on Friday (August 17th).

Phish released a statement about the cancellation saying,

“We are still in shock. The entire site is already set up and ready to go after literally months of work by our beloved hardworking crew. We keep waiting for someone to come over and tell us that there is a solution, and that the festival can go on.”

Refund information isn’t available at this time, and Phish’s next performance will be in Colorado from August 31st through September 2nd.

Currently, there’s no word on whether or not the festival will be rehosted somewhere else this year or if fans will have to wait until 2019 for another Curveball Festival.

Phish extended their North American tour through the rest of this fall with performances in Albany at the Times Union Center on October 16 and 17, so Northeastern fans still have a few chances to see them perform.

The Curveball Festival has been held at Watkins Glen, NY two times in the past, once in 2011 and again in 2015.  Fans have been incredibly tame in expressing their disappointment through social media, with some sharing images of the setup being taken down and asking Elon Musk to help.