H&M’s ‘Coolest Monkey In the Jungle’ hoodie is sparking a massive outrage.  Now, the store is dealing with incidents at its stores.

It started with a hoodie.  Now, H&M is dealing with a growing public relations nightmare.

For those just tuning into this one: last week, H&M was sharply criticized for selling a kids hoodie emblazoned with the tagline ‘Coolest Monkey In the Jungle’.  The model for the hoodie was an African-American boy.

H&M has since pulled this item from their site. 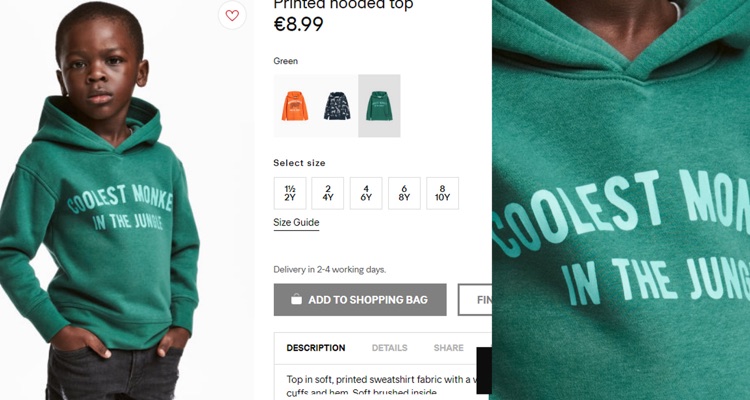 That sparked a huge reaction from The Weeknd, who immediately terminated his marketing relationship with the company.  That was closely followed by a high-prile rebuke from Lebron James.  Others soon started piling on.

Shortly thereafter, the mother the boy model weighed in, calling the reaction completely overblown.  According to the mom, this is one hundreds items modeled, and this never raised a flag (she was there when her son posed).

But that hasn’t slowed a rising tide protest — including several altercations at H&M stores themselves.

Like this one.  At a location in New York last night, a man burst into the store shirtless with a gorilla mask.

The man remains unidentified, and no charges have been filed.  In order to avoid arrest, the man made his rampage brief, knocking over some displays before exiting.

As he left, the masked man proclaimed, ‘Fuck H&M!’

Elsewhere, other incidents at H&M locations are surfacing.  In one episode, a man walks into a the retailer demanding to see the ‘Coolest Monkey In the Jungle,’ before standing on a display and shouting.  The disruption ended without violence.

As for The Weeknd, it’s unclear how this abrupt termination will impact the existing sponsorship contract.  In most branding partnerships, one party can leave if there’s an intentional breach, though it’s unclear if H&M intentionally tried to piss anyone f.

Indeed, the counterargument here is that this is just a sweatshirt hoodie about a monkey, with no racist attacks attempted.  Accordingly, The Weeknd may have lost out on a lucrative, long-term contract — not to mention his latest payment.