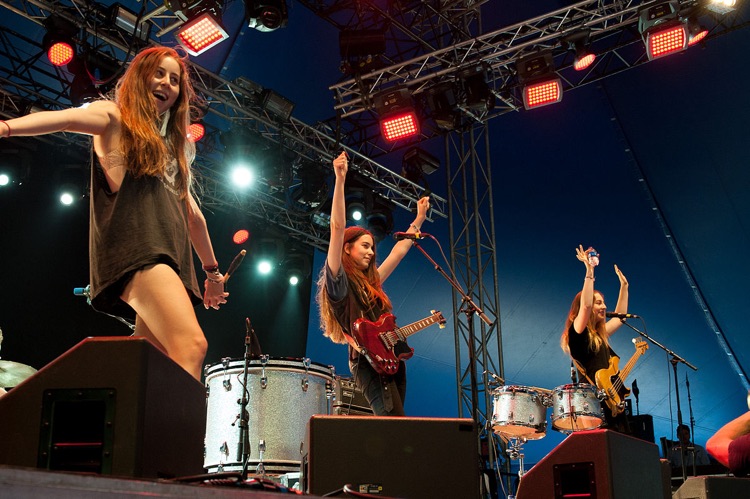 The Haim sisters were shocked to discover they’d received 1/10th the amount another band — specifically, a male band.

Although they never disclosed the name the festival, the Haim sisters find it incredulous that they were paid significantly less than a male counterpart.  Here’s another problem: we don’t know the male group in question, though Haim is representing  that they’re otherwise equals.

The other group was apparently paid 10 times more.

Accordingly, the American pop rock band, composed three sisters, took swift action.  The group fired their booking agent over the outrage, pinning the blame on their dealmaker.  The move was made shortly after the band discovered the disparity.

+ Evanescence Got Sued for $1.5 Million by their Former Manager. The Judge Decided to Give the Band $1 Million.

They didn’t wrangle with festival coordinators or demand more, believing the deal to be a beneficial promotional opportunity. “We had been told that our fee was very low because you played at the festival in the hope you’d get played on the radio,” Danielle told Grazia magazine.

Unfortunately, the details are so light on this one, it’s hard to adequately compare the two groups in question.  And we don’t have any details on the budget the festival, not to mention the negotiations involved.  Either way, Haim claims that their musical ability was belittled just because they are females.

Alana was quoted as saying that “a lot people automatically accept the fact that an all-male band writes their own songs, but when they see an all-woman band, they’re like, ‘Oh there must be a man behind it, fueling their fire.’ ”

The issue highlights a glaring gap in gender salaries within the music industry.  In a recent report, the UK-based Sony and Warner labels were found to be paying 33.8% less to women.  A separate study found that about 22% the hits were by female artists on the Billboard charts.