Donald Trump tweeted his thanks to Chance the Rapper for ‘really getting it’ on African-American issues.

Kanye West’s allegiance to Donald Trump has never been stronger.  But, Chance the Rapper?

Just this morning, Trump personally thanked Chance the Rapper for his support, while praising the independent Chicago rapper for ‘getting it’ when it comes to African-American issues.

“Kanye West has performed a great service to the Black Community,” Trump tweeted this morning.  “Big things are happening and eyes are being opened for the first time in Decades – Legacy Stuff!”

“Thank you also to Chance and Dr. Darrell Scott, they really get it (lowest Black & Hispanic unemployment in history).” 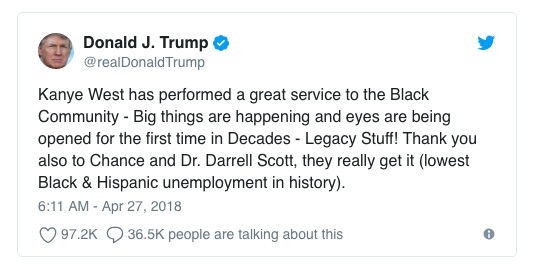 Across numerous tweets, West declared that he ‘loves him,’ referring to Trump, while calling the President his ‘brother’ who shares his ‘dragon energy’.  That follows earlier pro-Trump outbursts, particularly after Trump’s 2016 victory, and a meeting between the rapper and President-Elect at the Trump Tower in New York.

Shortly thereafter, West was excluded from Trump’s Inauguration for not being ‘traditionally American’ enough, though West’s support for the President remained unaffected.

As part his pro-Trump rant, West bragged that he owns a Make America Great Again hat personally signed by Trump himself.  He also posed for a picture with his MAGA cap, alongside Universal Music Group chairman & CEO Lucian Grainge and YouTube executive Lyor Cohen.

In his defense, Chance the Rapper fered his controversial support, tweeting that “black people don’t have to be democrats”.  Almost immediately, Trump supporters and ‘alt-right Twitter’ interpreted that comment to be a vote confidence for the President.

All which was enough to provoke the congratulatory response from Trump, who construed Chance’s tweet as support for the Administration.

In response, Chance quickly started damage-controlling, calling Trump racist (among other things).  “I didn’t speak up because I agree with what Kanye had to say or because I fuck with Trump,” Chance the Rapper responded.

“I’d never support anyone who has made a career out hatred, racism and discrimination.”

Chance the Rapper has now fered a full statement on the matter:

“Anyone who knows me knows how passionate I am about my city and my loved ones. Kanye West is not just a mentor or big homie to me. He’s my family. No matter how much I may disagree with him, it’s hard for me to watch people talk about someone I love — even if they were justified in doing so. I didn’t speak up because I agree with what Kanye had to say or cause I fuck with trump, I did it because I wanted to help my friend and cause I felt like I was being used to attack him. Unfortunately, my attempt to support Kanye is being used to discredit my brothers and sisters in the movement and I can’t sit by and let that happen either.

“I’d never support anyone who has made a career out hatred, racism and discrimination. I’d never support someone who’d talk about Chicago as it’s hell on earth and then take steps to make life harder for the most disenfranchised among us. I understand why people are disappointed with my words, but I was raised to believe actions speak louder than words. So let my apology be seen in my future works, and let me make up for my poorly timed comments with immediate action and advocacy for those who need it most.

“My statement about black folk not having to be democrats (though true) was a deflection from the real conversation and stemmed for a personal issue with the fact that Chicago has had generations democratic ficials with no investment or regard for black schools, neighborhoods or black lives. But again, said that shit at the wrongest time.

“We have to talk honestly about what is happening and has been happening in this country and we have to challenge those who are responsible, as well as those who are giving them a pass. If that happens to include someone I love, someone who is my brother-in-Christ and someone who I believe does areal want to do what is right, it’s not my job to defend or protect him. It’s my job to] pick up the phone and talk to him about it.”