Posted on February 15, 2018 by Valencia Vasquez 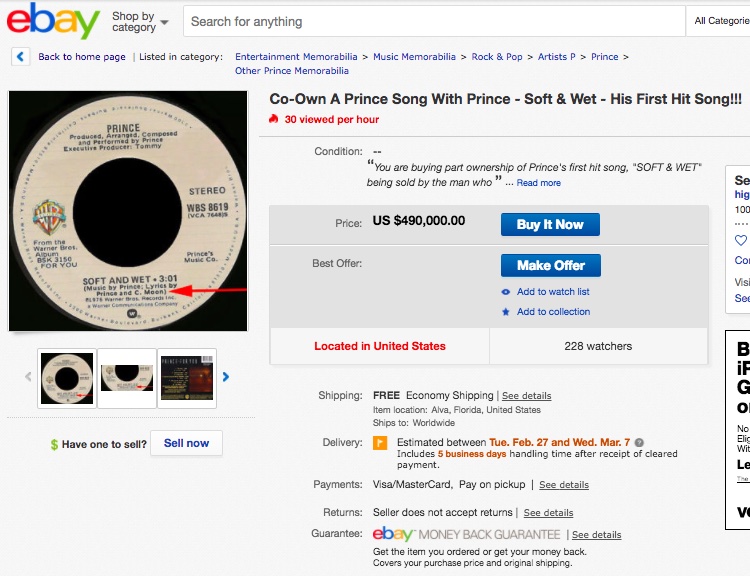 As a prolific songwriter, the purple one shared only a handful co-writing credits in his massive repertoire songs.  That includes his first-ever solo single, ‘St and Wet,’ from his 1978 debut, For You.  The song was Prince’s first recognized release, and even enjoyed a short stint on the singles chart.

While Prince is listed as the sole composer and performer on the track, he splits lyricist credits with producer Chris Moon.  Chris Moon used to own the Minneapolis studio where Prince laid down his first demos.  Now, Moon is putting his credits up for sale for the song — on eBay.

Moon is willing to consider the best fer, though the current listed price is $490,000.  That suggests an ultimate price north half-a-million, depending on the buyer.  Publishers and potential investors will undoubtedly do the math on this, and calculate the earning potential on this lesser-known Prince track.

That includes deflating publishing royalties from streaming, which is quickly becoming the de facto was to enjoy music.

A billionaire collector, however, may simply jump at the chance to purchase a piece history.

Moon told the Star Tribune that “anyone who buys this probably shouldn’t be doing it for financial purposes.  It’s more about owning one the unique collectibles ever related to Prince.”

“I have enjoyed hearing the song countless times over the years, been paid well and am proud it,” Moon said in the eBay listing. “It has achieved everything and more for me, so I feel it is time to pass the torch to a Prince fan who will continue to cherish and enjoy owning it as much as I have.”

Let’s wait and see who is going to grab this once-in-a-lifetime fer.