A very popular strip club in Baltimore, Maryland has been shut down until the health department labels it safe again! The health department revealed that a dancer was on stage when out nowhere she had explosive diarrhea. The cause the incident has been initially linked to a contaminated buffet at the venue. While investigations continue, the venue has not been named.

According to reports by local media, the strip club was nearly full when the incident occurred, and both staff and customers were reported to have eaten from the free buffet. Patrons sitting near the stage were the most directly affected by the incident, which occurred close to 11pm. According to a witness at the venue, three dancers were performing on separate poles when the first sign trouble emerged.

“At first I picked up a bad smell; I thought maybe the guy next to me had farted,” said the witness, who declined to be named. “However, the smell got worse and I noticed that a lot other guys were looking around to see what it was.”

It was at this point that the first dancer to suffer from diarrhea was unable to control her bowels any longer, and ‘a stream brown liquid soon gushed over the stage’. “It was absolutely disgusting. A number guests immediately puked.”

The other dancers also suffered diarrhea soon after. “They had a hard time getting f the stage. High heels and diarrhea really don’t mix.” Some the guests also contracted diarrhea and there was a rush on the men’s room, which unfortunately did not have enough stalls to cope with the sudden influx in demand. 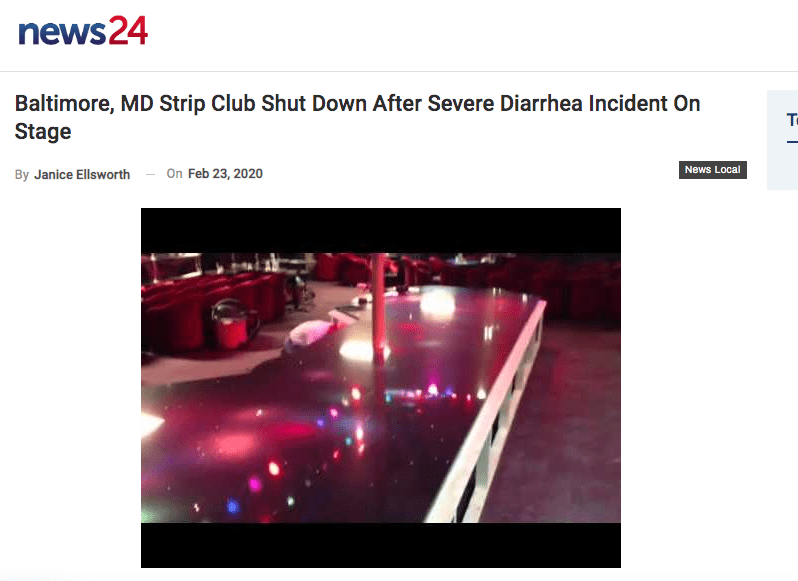