Currently, US-based broadband internet access is dominated by a few companies, some whom enjoy outright monopolies.  But advancements in ‘fixed wireless’ broadband delivery could change that landscape — and net neutrality — in the future.

The recent repeal net neutrality in the US is frequently criticized as a gift to entrenched, billion-dollar ISPs.  Companies like Comcast, Cox Communications, and Verizon want to charge companies for access to their customers, starting with paid ‘fast lanes’ and other tolls.

Now, they have the power to do just that.

Sadly, consumers ten have little choice when it comes to their ISP.  And in many areas, there’s only one ble option for receiving broadband internet access.  All which means that many Americans are stuck paying high-priced (and increasing) bills for a service that may soon fer slower delivery non-paying sites and services.

Now, there may be a dramatically cheaper internet delivery technology on the horizon.  Indeed, a classic ‘disruption’ could be brewing in this category, thanks to a pair aggressive upstarts.

Starry is focused on ‘fixed wireless’ broadband, which involves base stations delivering over-the-air internet to nodes within a geographic radius.

Those nodes are called Starry Points (see above), which deliver internet access by communicating with a base station.

The concept was started by Chet Kanojia, who also founded Aereo (more on that later).  In early 2016, the company started deploying this concept in urban areas, planting base stations on building tops to communicate with Starry Points.  Basically, Starry uses millimeter wave technology to deliver and receive data packets, with speeds roughly 200 mbps in many deployments.

This is all tech-babble for most people until you start talking about the price.  Ultimately, Starry’s system could dramatically reduce the monthly fee for conventional broadband internet access.  In fact, competitive broadband bandwidth could drop as a low as $20 a month, a fraction what providers like Comcast currently charge.

Currently, Starry is fering a ‘lightning fast’ 200 Mbps broadband WiFi station for $50 a month.  But Starry’s product and network is in its early stages. 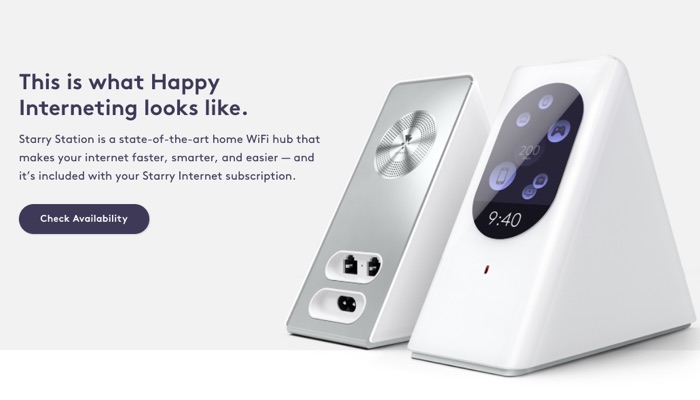 Now, Starry and Kanojia are putting this concept into overdrive.

Just this week at CES, Starry announced a partnership with Marvell, maker  802.11ac and new 802.11ax chipsets.  Essentially, Marvell is helping Starry to build the radio chipset for its next-generation Starry Point system using the 802.11ax chip.  All which means better internet access at potentially a fraction the cost.

Now here’s the best part.  Starry and Marvell have also decided to keep their reference designs ‘open source,’ so anyone can build a fixed wireless system using the technology and patents.  It’s basically the same idea hatched by Tesla for battery technology, with the broader aim growing a much bigger industry around the emerging technology.

If all goes well, dozens different companies and investors will jump into this ‘pre-standard 5G’ technology.  And finally give entrenched ISPs a run for their money.

And given the open ethos Starry and Marvell, it’s likely the company will also favor a more open network as well.  After all, that’s what most customers want (and studies prove it).  And once a brand-new delivery network is created, the company controlling it gets to set the rules.

Right now, this idea is just gaining steam.  But once it starts to gather momentum, you can expect heavyweights like Comcast to start fighting it aggressively.  Aggressive rate drops, lawsuits, and legislative lobbying are just a few tools this mega-billionaire has used to tilt the playing field in its favor — and destroy burgeoning ideas and technologies in the process.

All which makes Kanojia the perfect CEO.

Back in 2014, Kanojia lost a Supreme Court battle that effectively shut down his previous company, Aereo.  That brilliant idea delivered broadcast channels over the internet, with a rotop antennae capturing the over-the-air signals.  The signals were then transcoded into digital streams, and packaged into a monthly service for internet-based customers.

Of course, big networks hated the idea, and buried Aereo accordingly.  But Kanojia has undoubtedly learned some vital lessons from that loss.  And he’s obviously not afraid to challenged entrenched industries.