Posted on September 10, 2019 by Valencia Vasquez

“Industrial and classical elements re-contextualize a 500-year-old melody in the age of digital fantasy.”

The song continues the Baltimore-based artist’s ongoing exploration into future-human themes that heavily pull from the textures and timbres of classic anime and fantasy RPG.

As :3lON writes, “The lyrics were written from the perspective of a character in a medieval fantasy realm that has awakened to find that the person they care for has left to fight for their kingdom.”

The track was produced by fellow Baltimore-based musician Sentinel and was built around a harp sample derived from musical notes painted on a body in Hieronymus Bosch’s classic painting Garden of Earthly Delights.

‘Aria of Resilience’ is out now. Check out the cover art by German artist XOF below. 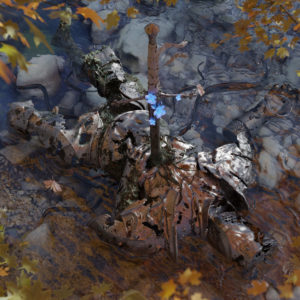